During the years 1992-1995 I lived in a small town around 100 miles southwest, as the crow flies, of Anchorage, Alaska. From November, 1993 through June, 1995 I was a volunteer classical music disc jockey and announcer on the local public radio station. My time slot was from 10:15 AM until 12 Noon on Sundays. 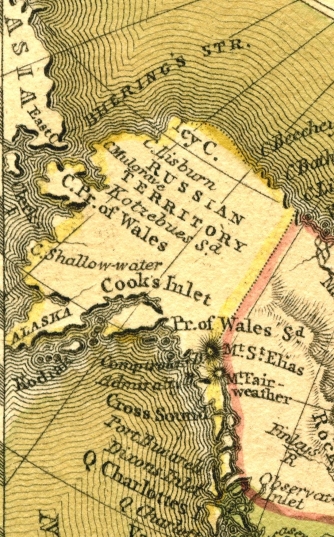 It was just before this period that the Soviet Union dissolved (1991) and Russia regained its previous status as a country. This renewal of the Russian state was of great interest to people in Alaska because of the many physical and historical connections to the pre-Soviet Russia. Sitka, Alaska, for instance, is the former capital of Russian America. Many place names in Alaska are of Russian origin: mountains, islands, rivers, settlements. Many of the designated Alaska Natives have Russian surnames. And, in the area where I lived on the Kenai Peninsula, there are settlements of “Old Believers,” remnants of a world-wide diaspora from Russia of the 17th Century.

For one of my musical programs I recognized this Alaskan connection to Russia by presenting a program about a group of pre-Soviet Russian composers. Here is the text, somewhat edited, from that program in February 1994:

There is a special poignancy for Alaskans in regarding the music of pre-soviet Russia. We inhabit what was once a vast business of the Tsar called Russian America; we have, as part of our community, people who observe the religious and cultural heritage of their ancestors who emigrated from Tsarist Russia; and, only recently, the soviet yoke has dropped from the peoples of Russia to release them to an unknown future. I can only hope that this future will include a return to the spirit of the music written prior to the Bolshevik revolution; I hope we shall never again see a great composer feel compelled (by Stalin’s oppressive attention) to title his music “A Soviet Artist’s Reply to Just Criticism,” as did Shostakovich of his 5th symphony. (His actual phrase was “a constructive creative answer of a Soviet artist to just criticism,” as cited in Shostakovich and Stalin: The Extraordinary Relationship Between the Great Composer and the Brutal Dictator). [I commend to your viewing and listening this six-part YouTube presentation of the history and analysis of the entire symphony, presented by Michael Tilson Thomas and the San Francisco symphony]

With all that as preface, we will soon hear some music from a group of five composers born around 150 years ago who were collectively nicknamed “The Five.” These are: Alexander Borodin, César Cui, Mili Balakirev, Modeste Mussorgsky, and Nicholas Rimsky-Korsakov. Without further delay, here is the prelude to the Opera Kovantchina by Mussorgsky, commonly known as “Dawn on the River Moskva.” It was completed and orchestrated by Rimsky-Korsakov.

Peter Tchaikovsky was a contemporary of “The Five” and his opinion of them was: “The young Petersburg composers are very gifted, but impregnated with the most horrible presumptuousness and a purely amateur conviction of their superiority.” Of Mussorgsky, Tchaikovsky said: “…with all his ugliness, he speaks a new idiom.”

To give Mussorgsky a little more time to show his presumptuousness and ugliness, here is one more piece by him, “Night on Bare Mountain”, music that has supplied the atmosphere for countless fright stories in movies and elsewhere.

Of Rimsky-Korsakov, Tchaikovsky said “he is the only one among ‘The Five’ who discovered that their doctrines had no sound basis, that their denial of the masterpieces was nothing but ignorance.” It should be noted that Rimsky-Korsakov was a teacher of Igor Stravinsky. The next piece of music should be an apt antidote to the underworld spirits of the last one. Here is Rimsky-Korsakov’s Overture on Liturgical Themes, otherwise known as “Russian Easter Overture“.

Next, we are to hear from Mili Balakirev. Balakirev is perhaps more important as instructor and father-confessor to the group of five than as a composer in his own right, but he did leave to posterity some fine songs. Here is the largo movement of Balakirev’s Symphony No. One.

There are two more composers of “The Five” to discuss, but I have available musical recording only of one. The one we will not hear is César Cui [the link will direct you to a discography of some current recordings]. The last of the five we shall hear is Alexander Borodin. Tchaikovsky said of Borodin: “He has a great talent which has come to nothing because fate has led him into the science laboratories instead of a vital musical existence.” Borodin was a chemistry professor; a statue erected to him pays tribute to his services to science rather than to music. After station identification we will hear Borodin’s string quartet number two in D major.

And there you have four of “The Five” who were revolutionaries in music about 150 years ago during the time of the Russian Tsars and about whom the musical giant Tchaikovsky publicly expressed mixed, but strong, feelings. Since Tchaikovsky played the role of antagonist to these composers, we should give him some time on the bill. We will hear his “Francesca da Rimini”. This female character appears in Dante’s “Inferno” as a hopeless lover of Paolo, a man not her husband. Thus is the mood of Tchaikovsky’s “Francesca da Rimini.”

I hope you enjoyed hearing from four of “The Five” St. Petersburg composers of 150 years ago, and their sometimes detractor, Peter Tchaikovsky. This ends our program for today. This is Pavel Hammer wishing you close harmony…and — stay in tune!
——————End Radio Broadcast——————

It has been 18 years since the collapse of the Soviet Union. I feel certain there are Russian composers at work, renewing the traditions of wonderful symphonic and solo piano music. I regret to say I don’t know who these might be. Do you?