“Hard Times,” by Studs Terkel: Essential Reading for These Times

I am writing a memoir and family history. In preparing the draft of the first section (ancestors and others) I will include reference to The Great Depression of 1929-1941. One of my writing colleagues suggested I read Hard Times by Studs Terkel. I now have.

I hope I am not being dramatic in suggesting this book should be required reading for everyone in the United States, perhaps also the United Kingdom—right now!

Terkel’s book consists entirely of interviews with people who lived during the years of the Great Depression, and with those whose parents lived through it. There are many parallels between that period and the period the USA has entered into.

In 1929 there was a great financial bubble (created or exacerbated by government policy, or lack thereof), and it burst. The government engaged in new and great programs to shore up the economy and to help create jobs for the unemployed. Capitalism needed a rescue, families and individuals needed food and shelter, bread-winners needed to regain self-respect in their ability to provide for their families. Farmers couldn’t sell their produce and meat even at cost, so they destroyed food (sometimes under a government program) to bring prices up, while other people were without food. People marched on Washington D.C. to get support and attention, and were shot, upon official order, by soldiers, “conspicuously” led by General Douglas A. MacArthur.

Other people were not affected adversely, and some even thrived during this period.

My father was deeply affected by The Depression, and simultaneously by a series of family tragedies. He never stopped talking about “The Depression,” even after he achieved some financial security. He was on a government work program during the first few years of my life: the Federal Writers Project of the national Works Progress Administration.

It seems clear that, in the short-term, the Federal Government‘s intervention in the national economy and labor market had at least the value of providing the energy accompanying hope in overcoming the despair that gripped so many people. It remains unclear whether the programs would have succeeded over the long term. The USA entered into World War Two in 1941, and during the war almost all the programs disappeared—with a major exception of the Social Security program.

The president of the USA during most of the Great Depression was Franklin D. Roosevelt. He was hailed as a inspirational leader by many, and reviled as a Communist sympathizer and as having other subversive tendencies by still others. He remains controversial to this day, especially as some of the programs he initiated are being considered and acted upon again during the current banking and financial emergency.

“Hard times” have already hit hundreds of thousands of people who have lost their life’s saving and many other assets, and also those who have lost jobs in the current round of layoffs in many industries.

There were some benefits in living through Hard Times. Many white people became as poor as most black people had been, and racial prejudice-induced barriers to fellow-feeling were overcome in many places. Personal survival skills and community organizing skills were developed which the country, as a whole, derived value from in succeeding decades.

A persistent theme through the book is that when the hard times came, the people hardest hit mostly pulled together and shared their meager resources, without having any outside authority dictate it. People felt closer than they do now when the times have been so good for so long; communities now see more competition than collaboration when the ethic of “getting and spending” (as my father often said) is the norm.

Incorrect assumptions and many mistakes were made and, therefore, lessons were learned the hard way by those attempting to deal with the country’s problems at the national level. Unless current government leaders and policy makers read this book now, these lessons may have to be learned all over again—the hard way. 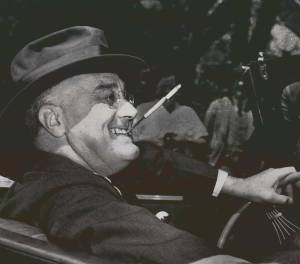 Franklin D. Roosevelt, President of the USA during Hard times