My father was a student of history. When I was in my ‘teen years he often regaled me with tales and names of the French Enlightenment and the French Revolution of 1789 of which I understood little. What I retained through the years were names such as Robespierre, Marie-Antoinette, Voltaire and Rousseau. Oh yes, the “Storming of the Bastille” was also important, but obscure to me. (An aside: “…let them eat cake” was not uttered by Marie-Antoinette, the wife of King Louis XVI of France).

Within the last few years my delayed education in history has been improved by my reading of books about and involving the French Revolution, such as Fatal Purity: Robespierre and French Revolution by Ruth Scurr and The Roads to Modernity: The British, French and American Enlightenments by Gertrude Himmelfarb.

Now I have come upon a book entitled Rasero. Although the word is given as the name of the main character of the book, it is not a proper noun and, in Spanish, means “leveller.” I received the book in exchange for another I gave to a correspondent in the United Kingdom. We met, online, through BookCrossing.

Rasero, by Francisco Rebolledo and translated from the Spanish by Helen R. Lane, is well-reviewed here.

The book turned out to be a page-turner for me. Through a fictional character we are introduced, intimately, with major characters in the era of The Enlightenment, and those leading to and participating in the French Revolution of 1789. The major sections of the book are entitled: Diderot, Damiens, Voltaire, Mozart, Mariana (a fictional character), Madame de Pompadour, Lavoisier, Robespierre, and Francisco Goya.

The author uses a clever device to lead us into the future to see the putative results of the Enlightenment, namely, the uses of science and technology to improve, and make more disastrously efficient, warfare. The device used is Rasero’s visions of the future upon achieving orgasm, which he has with many lovely partners, but no visions with the one love of his life. Although somewhat ribald, the author’s depiction of the pleasures of the flesh are not, in my view, to the main point of the book and are offered in a pleasant, almost poetic, manner.

The voice in which the novel is written was strange to me at first. There is an omniscient observer describing to the main character what he is experiencing, and the reader is witness to this one-way conversation. “You” is constantly used by the narrator to tell Rasero how he is feeling and what he is experiencing. There is a twist on this near the end which I will not reveal. 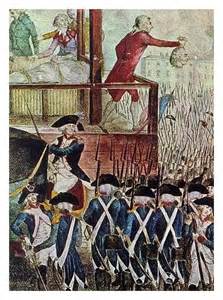 A depiction of the event wherein the head of King Louis XVI was severed from his body by The Guillotine, his public execution having been ordered by “The Committee of Public Safety”

The main point, I feel, is made in this passage where Rasero is hotly criticizing Robespierre for not stopping “The Committee of Public Safety” from executing Pierre Lavoisier, the eminent scientist and chemist:

Power…has corrupted you. No one has yet been born who, reaching power, is not corrupted, and you…are very far from being the exception…You’ve acquired absolute power. a power that allows you to cut off lives, the way one snips flowers in the countryside. And that power has corrupted you absolutely…

Rasero ponders elsewhere in the book that Robespierre’s vision of the correct society, one based on rational principles, is so “correct” in Robespierre’s mind that it overtakes all other considerations. Even as he is led to the guillotine to lose his own head where countless others through his agency have lost theirs, Robespierre has absolute certainty he was and is right (my emphasis).

A scholar on the subject summarizes thus:

Robespierre’s failure can be viewed as that of a man so narrow-minded in his views that eventually he cannot conceive of anything outside of them, a man so firmly convinced of his own absolute rightness that he cannot see the glaring errors he makes. It had grown inconceivable to him that anyone should oppose him successfully, and when someone did, the blow numbed him into inaction for a while. Although he started out with the best of motives, it came to the point where protection of the ideals for which he stood was everything to him, whereas protection of the people whom the ideals were originally to protect meant nothing. [Source]