The Century of Africa

During the remaining 80 years of this century Africa’s population will more than triple to around 4.3 billion. (Source: United Nations, Population Division) 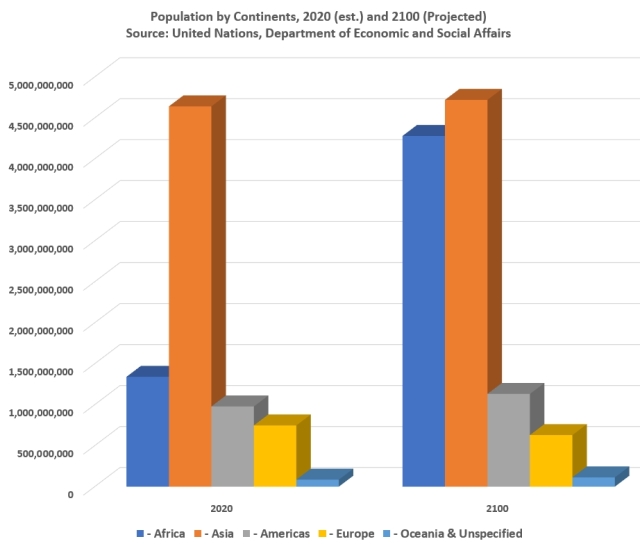 Here are 12 of the 54 countries in Africa which will, in year 2100, have populations of at least 100 millions, which in the aggregate will contain 2/3  of the population: 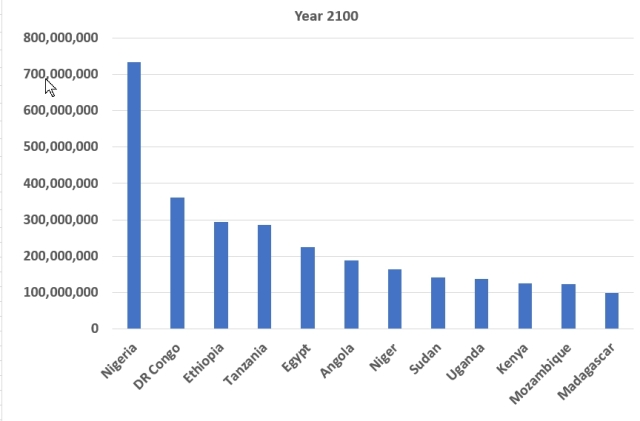 It boggles my mind that these countries may achieve such populations between now and 80 years hence. Assuming the United Nations will find that their projections are substantially correct, I wonder about the ability of these countries, even with imports from other continents, to continue to feed the people. I wonder about the effects on the environment, the availability of potable water, effective sewerage and refuse disposal, and so forth.

The projected population increases, for all 54 countries, range from near zero to almost 600%. Exactly half (27) of the countries will at least double in population: 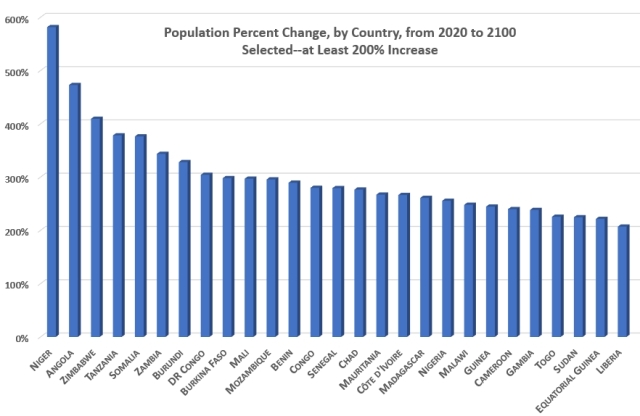 So, again, if these population projections will prove to be substantially correct, African nations will need help to build their infrastructure and to develop better governance.

Eight years ago I wrote an article: What Went Wrong with Africa? after attending a colloquium at The Swedish Institute of International Affairs.  Professor Roel van der Veen of the University of Amsterdam told us that…

… when current African countries gained their independence from European colonial powers the existing elites were purged or they left the country. A new elite replaced them which are different from the elites of developing countries. These are local chiefs and other leaders from the local level, not all of whom had similar interests, other than to retain local power. This makes the state a fragile entity because these elites do not have the concept of a state foremost in their interests.

To satisfy the elites the government subsidizes their basic needs, especially food. The state government, as a monopsony,  buys the agricultural produce from the farmers at below world-market prices and sells it to the elites at a profit, but still at below world market prices. Over time, the farmers are discouraged and some number of them migrates in one of two directions: toward the city, or toward more remote areas to return to subsistence farming. Thus, the agricultural base of the nation-state is reduced and, concomitantly, its wealth. 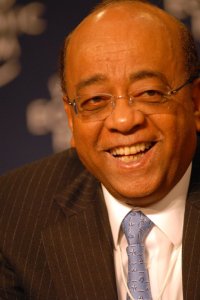 Enter Mohammed “Mo” Ibrahim , a Sudanese-British billionaire businessman. He worked for several telecommunications companies, before founding Celtel, which when sold had over 24 million mobile phone subscribers in 14 African countries. After selling Celtel in 2005 for $3.4 billion, he set up the Mo Ibrahim Foundation to encourage better governance in Africa, as well as creating the Mo Ibrahim Index, to evaluate nations’ performance. In 2007 he initiated the Mo Ibrahim Prize for Achievement in African Leadership, which awards a $5 million initial payment, and a $200,000 annual payment for life to African heads of state who deliver security, health, education and economic development to their constituents and democratically transfer power to their successors. Ibrahim has pledged to give at least half of his wealth to charity by joining The Giving Pledge.

The Ibrahim Prize for Achievement in African Leadership is awarded to a former Executive Head of State or Government by an independent Prize Committee composed of eminent figures, including two Nobel Peace Prize Laureates. The Prize recognises and celebrates African leaders who have developed their countries, lifted people out of poverty and paved the way for sustainable and equitable prosperity, and highlights exceptional role models for the continent. With a $5 million initial payment, plus $200,000 a year for life, the Prize is believed to be the world’s largest. (Wikipedia)

In 2007 the inaugural Prize was awarded to former president Joaquim Chissano  of Mozambique, for “his role in leading Mozambique from conflict to peace and democracy.

In 2008 Festus Mogae, former leader of Botswana, won the Prize. “President Mogae’s outstanding leadership has ensured Botswana’s continued stability and prosperity in the face of an HIV/AIDS pandemic, which threatened the future of his country and people.”

In 2009 the Prize Committee did not select a winner. The controversial decision came following the consideration of “credible candidates” and was interpreted by many as a laudable act in establishing a standard of credibility for the Prize.

In 2010 the Prize Committee decided not to award the prize.

In 2011 the Prize was awarded to Pedro Pires, former president of Cape Verde.

In 2014 the Prize was awarded to Hifikepunye Pohamba, former president of Namibia,: “During the decade of  (his) Presidency, Namibia’s reputation has been cemented as a well-governed, stable and inclusive democracy with strong media freedom and respect for human rights.

In 2017 the Prize was awarded to Ellen Johnson Sirleaf, former president of Liberia: “In very difficult circumstances, she helped guide her nation towards a peaceful and democratic future, paving the way for her successor to follow.”

As one can see, there have been five awards in the 13 years of this prize, to date through 2019 (leaving time, still, for a prize to be possibly awarded for year 2020).

Therefore, I reiterate: African nations, especially in light of their enormous population increases over the next 80 years, need help with their governance, which will be necessary to lead toward more effective development of their infrastructure.

Enter China
On May 4, 2019, Panos Mourdoukoutas wrote for Forbes.com: What China Wants From Africa? Everything.

China wants everything from Africa: its strategic location, its oil, its rare earth metals, and its fish, leaving African nations indebted to Beijing. In its long history, Africa has served the global ambitions of many foreigners. Foreigners have reached out to Africa as missionaries, financiers, and infrastructure builders. They have promised to place the continent on the globalization map and help its people grow out of poverty. But they ended up grabbing Africa’s riches, colonizing one nation after another, and letting their people steep in poverty. That may end up being the case again, with China’s recent infrastructure investment projects in the continent.

On the surface, these projects seem to serve the quest of African nations to build a sound infrastructure. But on closer examination, they serve China’s ambitions to write the rules of the next stage of globalization.  China wants to use Africa as a location to secure maritime roads that facilitate Chinese exports, as evidenced by Beijing’s large military presence in Djibouti.

Then there are Africa’s resources, oil, rare earth metals, and fish. “As a South African, I’ve seen China’s activities on the continent up close,” says Ted Bauman, Senior Research Analyst at Banyan Hill Publishing. “It’s clear that China’s primary goal with foreign investment is geopolitical, not economic. The most consequential investments are undertaken by state owned companies, not by Chinese private capital. They tend to focus on infrastructure like highways, ports and dams, and on public networks like the electrical grid.” (My emphasis)

That’s something many African countries desperately need in their bid to develop their economies. The trouble is that “these investments help to bind countries to China politically, and through debt obligations,” explains Bauman. “It creates a form of leverage that China can use to force these countries to support Chinese ambitions globally. In some cases, such as the Angolan oil sector or Congolese rare earth mining, Chinese investment helps to lock-in supply relationships with essential commodities.”

It seems clear that China (and to a lesser degree, Brazil and Russia, not discussed here) has seen into this future and has taken action on its own behalf well before other nations (esp. EU and USA) have effectively engaged with Africa for their economic and strategic interests.

What China Is Really Up To In Africa

U.S. Worries About Russian and Chinese Influence in Africa

China expands influence in Africa as US plays catch-up

China in Africa: Implications of a Deepening Relationship

China Militarizes Its Influence in Africa

10 Responses to The Century of Africa