I promised myself to write a blog about two books I have begun to read in tandem: The Perennial Philosophy, by Aldous Huxley, and The Varieties of Religious Experience, by William James.

What cheek. What hubris!

I now realize how inadequate is my available time and attention to create a useful bit of writing arising from this intention. These are two dense, classic pieces of writing, used as texts in university courses and serving as individual courses in psychology, philosophy, and religion for the autodidact.

So, I will take a bit from each where they intersect at the subject of “charity.” 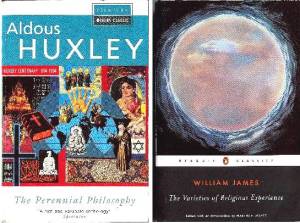 I now see charity as an easily misunderstood word and concept, or at least as being variously interpreted. I have found it a neutral term, while Eva finds it a distasteful one, connoting a relationship of superiority of one person over another (the giver and the receiver of charity). I have perceived there is a natural charitable impulse in people, and that governments tend to preempt this impulse through income redistribution: taxes on some, and government programs for others not similarly taxed.

But the discussion in the previous paragraph is off the mark; it is not addressing the fuller, more soulful original meaning of the concept of charity.

According to Huxley, the perennial philosophy is:

the metaphysic that recognizes a divine Reality substantial to the world of things and lives and minds; the psychology that finds in the soul something similar to, or even identical with, divine Reality; the ethic that places man’s final end in the knowledge of the immanent and transcendent Ground of all being…Rudiments of the perennial philosophy may be found among the traditional lore of primitive peoples in every region of the world, and in its fully developed forms it has a place in every one of the higher religions.

By a kind of philological accident…the word ‘charity’ has come, in modern English, to be synonymous with ‘almsgiving,’ and is almost never used in its original sense, as signifying the highest and most divine form of love…(C)harity is disinterested, seeking no reward, nor allowing itself to be diminished by any return of evil for its good…(P)ersons and things are to be loved for God’s sake, because they are temples of the Holy (Spirit)…The distinguishing marks of charity are disinterestedness, tranquility and humility. But where there is disinterestedness there is neither greed for personal advantage nor fear for personal loss or punishment…

As for Varieties, Wikipedia describes the book thus:

A Study in Human Nature…by the Harvard psychologist and philosopher William James that comprises his edited Gifford Lectures on “Natural Theology” delivered at the University of Edinburgh in Scotland between 1901 and 1902. These lectures concerned the nature of religion and the neglect of science, in James’ view, in the academic study of religion. Soon after its publication, the book found its way into the canon of psychology and philosophy, and has remained in print for over a century.

James has this to say about charity in his chapter on “Saintliness,” which condition elicits these “practical consequences:” asceticism, strength of soul, purity and charity. Regarding the latter, he writes: “The shifting of the emotional center (toward loving and harmonious affections) brings…increase of charity, tenderness for fellow-creatures…The saint loves his enemies, and treats loathsome beggars as his brothers.”

“…Charity and Brotherly Love..have always been reckoned essential theological virtues…But these affections are certainly not mere derivatives of theism. We find them in Stoicism, in Hinduism, and in Buddhism in the highest possible degree.”

I found no passage where James, like Huxley in a later time, harked back to an earlier and more apt understanding of the nature of the concept of charity. I take this to mean that the general understanding of the English word in James’s time had not yet made the lamentable change to which Huxley refers.

What is there to glean from this brief exposition on “charity?”

First, I see no essential difference regarding the subject between these two great thinkers.

Second, I see that Huxley’s lament that we have lost the original meaning is importantly true, at least for me.

Neither of these writers was a religionist nor a proselytizer of any creed or faith. Yet, each seemed quite comfortable in quoting from many creeds; and, each shows us most creeds teach that we are innately holy and we should relax, so to speak, and allow our holiness to be manifest.

I conclude that charity is found in one’s soul and realized by one’s loving actions toward others.