Heroes and Martyrs of the Press: Samizdat 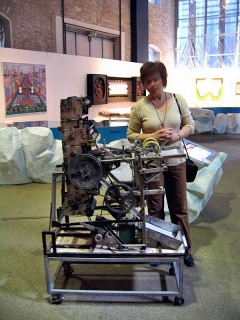 A I reported in Chronologies of Tyranny, War and Genocide, Eva and I visited Budapest, Hungary in April, 2004. We had a soulful visit to the Millenáris Park Exhibition Hall, which was then housing a traveling exhibit of Samizdat printing equipment and paraphernalia, art, and sculpture.

The Russian word Samizdat means ‘publishing by yourself’: “You write by yourself, edit by yourself, you censor by yourself, you distribute by yourself and you do time for it by yourself as well”– (Vladimir Bukovsky). Everything the authorities in the Soviet dictatorships prohibited or that censorship did not permit found its ways into intellectual underground: out of posters and leaflets and typed or printed books, out of stamps and photographs and provocative works of arts there arose a cosmos apart, unique and colourful. Samizdat existed in all countries of the Soviet sphere of power. It gained its widest circulation in the former USSR, Czechoslovakia, Poland, Hungary and the GDR. With its 400 exhibits, the Samizdat exhibition attempts to rescue this fascinating and colourful world from oblivion. [Source]

Upon leaving the exhibit to re-enter the lobby where the book and gift store is located, I saw a large wall exhibit showing the chronologies of Samizdat in the five countries mentioned in the quoted passage, above: the former USSR, Czechoslovakia, Poland, Hungary and the German Democratic Republic (East Germany).

It was chilling and thrilling to see about the brave writers, artists and publishers who refused to be intimidated by the Soviet authorities. Many writers and publishers were jailed and sent to mental hospitals; some were killed. I rushed to the book store to ask for a copy of this chronology in English, but only Hungarian and German was available. So I went back to the wall and took sixteen photographs of the entire display. Later, at home, I transcribed the text into Excel, then into an MS Word document which you can download from here: History of the Samizdat Movement A few more images from the exhibit can be seen here.

5 Responses to Heroes and Martyrs of the Press: Samizdat