Why am I asking you this? Because a few months ago, while visiting Johannes & Anna in Uppsala, Eva and I met a married couple who came to Sweden a number of years ago, one from Moscow and one from Kazakhstan, about which country I learned something from them. I therefore became more interested in Kazakhstan and thought to present here what I have subsequently learned from Vadim and the Internet.

Here is what I learned from Vadim: 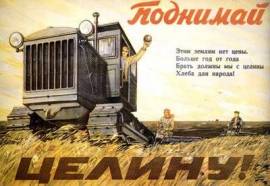 Turkic tribes populated this area, according to modern archeology, from at least 3,500 years ago. The invasion of Djengis Khan in 13th century united the tribes of the Kazakh steppe into their first state, the White Horde (Empire). The ethnic contribution to Kazakhstan was from one of three major lines of mongol origin, the so-called “white mongols”. The start of the Kazakh nation in the modern sense is commonly thought to begin with the founding of Kazakh Khanate in 1465. In the 17th century the empire split into three semi-independent kingdoms, called Jüz.

During the invasion of Djungars, or “black mongols, in the 18th century, the Jüz in the North, led by King Abul Khair II, became a dominion of Russia through a treaty of allegiance. The union of the Russian Empire with Kazakhstan was thus not a conquest but, in the beginning, a diplomatic process (such as that of the incorporation of Armenia and Georgia at another time). It is important to recognize that the Mongols of today’s Mongolia belong to the third line of Mongol origin—the Buryat Mongols or “Outer Mongols”. A part of this line is the modern population of Tuva an autonomous republic of Russian Federation.

According to the CIA World Factbook, current issues in Kazakhstan include: developing a cohesive national identity; expanding the development of the country’s vast energy resources and exporting them to world markets; achieving a sustainable economic growth; diversifying the economy outside the oil, gas, and mining sectors; enhancing Kazakhstan’s competitiveness; and strengthening relations with neighboring states and other foreign powers. 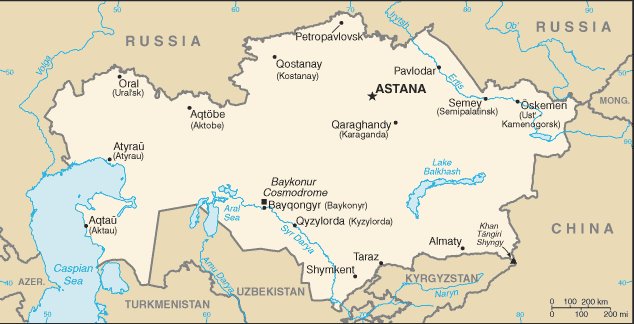 Since I am focusing on land area, here is the ranking of the top ten countries: 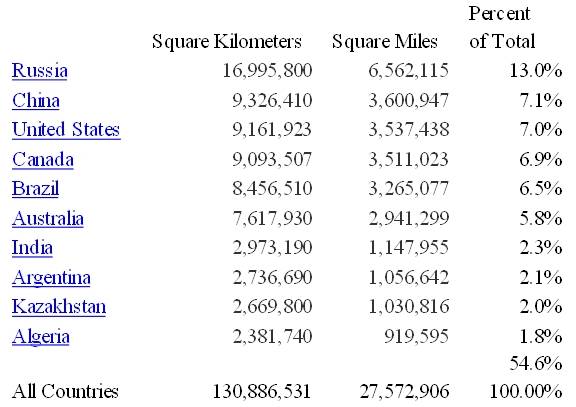 Vast in size, the land in Kazakhstan is very diverse in types of terrain: flatlands, steppes, taigas, rock-canyons, hills, deltas, mountains, snow-capped mountains, and deserts. Kazakhstan has the 62nd largest population in the world, with a population density of less than 6 people per square kilometre (15 per sq. mi.). Source: Wikipedia.

In looking at the general health of the country I reviewed several demographic indicators and compared them with those of neighboring countries. Even though it does not touch the border of Kazakhstan, I included Mongolia because it is so close, physically and historically. I included Azerbaijan and Iran because they are connected to Kazakhstan via the Caspian Sea.

[Please click on the image for an expanded view] 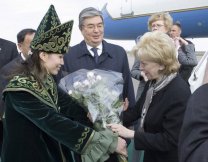 A Kazakh woman adorned in ceremonial dress presents a bouquet of flowers to Lynn Cheney, wife of Vice President Dick Cheney, as they both arrive in Astanta, Kazakhstan, Friday, May 5, 2006

Net migration per 1000 population is highest in Kazakhstan at -3.3, matched closely by Iran and Turkmenistan. Among all these nine countries only Russia has more people entering than leaving the country (+0.3 per 1000 population). I speculate this is due in large part to the repatriation of ethnic Russians from the other former Soviet republics, including Kazakhstan.

Of great importance to Kazakhstan and countries around the world is the great mineral wealth of Kazakhstan, especially oil. With this great wealth, both currently realized and more yet to be realized, also comes a lot of political energy, as we may safely assume is the reason for the visit of USA Vice President Cheney referenced in the above picture of the Kazakh woman.

KARACHAGANAK DEVELOPMENT PROJECT, KAZAKHSTAN: A major $3.5 billion oil and gas development in western Kazakhstan. The facilities are designed to process 165 thousand barrels of stabilised oil per day produced at new facilities at the Karachaganak Field. 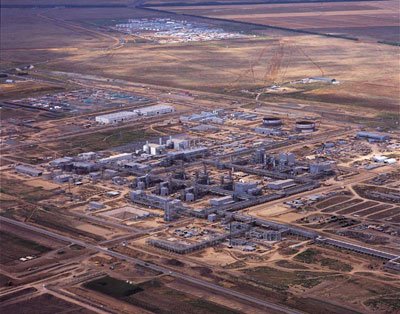 It seems Kazakhstan is a country with which we will be more familiar in the near future.

2 Responses to Quick! What’s the Ninth Largest Country in Area?