”…and let us take upon’s the mystery of things…” 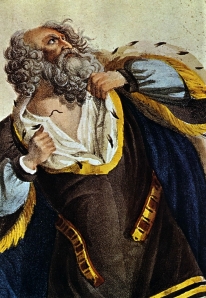 An artist’s depiction of “King Lear”

A passage from Shakespeare’s King Lear provides the source for the title of A. C. Grayling’s book of essays, The Mystery of Things.

No, no, no, no! Come, let’s away to prison:
We two alone will sing like birds i’ the cage:
When thou dost ask me blessing, I’ll kneel down,
And ask of thee forgiveness: so we’ll live,
And pray, and sing, and tell old tales, and laugh
At gilded butterflies, and hear poor rogues
Talk of court news; and we’ll talk with them too,
Who loses and who wins; who’s in, who’s out;
And take upon’s the mystery of things,
As if we were God’s spies: and we’ll wear out,
In a wall’d prison, packs and sects of great ones,
That ebb and flow by the moon. (Act V, Scene 3) [Source]

During a visit with my eldest daughter and her family in California, she gave me Grayling’s book of essays which she spotted at the bargain counter of the a nearby Barnes & Noble.  I was delighted to find in the Introduction to this book, published in 2004, an excerpted quotation of William Hazlitt that Grayling applies to the investigations conducted by today’s philosophers:

[They] are lost in the labyrinths of intellectual abstraction, or intricacies of language.The complaint… is not of the want of power in these men, but the waste of it; not of the absence of genius, but the waste of it… From the style which [many of them] had systematically adopted, they thought nothing done till they had perverted simplicity into affectation, and spoiled nature by art… [They] made a point of twisting and torturing almost every subject they took in hand, till they had fitted it to the mould of their own fancy… Their chief aim is to make you wonder at the writer, not to interest you in the subject; and by an incessant craving after admiration, they have lost what they might have gained with less extravagance and affectation.

This quotation (edited for brevity here) states much better and with much more clarity some points I was trying to bring forward in my web log entry of 11 February this year, What is an Intellectual, Really?

This immediately endeared me to the author and I eagerly went forward into sometimes daunting, always interesting, territory.

Anthony C. Grayling of Oxford and the University of London

The book presents 53 essays, by my count, divided under three headings: “A Miscellany of Arts,” Aspects of History,” and “Spectating Science.” In that there are 223 pages devoted to the essays, this averages to 4.2 pages per essay. I like such brevity. Where the essay is longer than the average, there are sometimes passages of poetic beauty, or at least a display of words that is beautiful in itself. Art, history and science. What a feast!

I marked many passages I thought I could discuss here, but there are too many. I’ll focus on only a few of the essays.

In Alberti and the Renaissance, Grayling mentions the book On Painting by Leon Battista Alberti, a man who greatly influenced Leonardo da Vinci. I have resolved to get this for Eva as perhaps useful, possibly inspirational, to her in her artistic pursuits.

In Art and Nature, author Grayling mentions “Two Cultures,” the first of several times he cites the author, C.P. Snow, throughout these essays. The two cultures referred to are the sciences and the humanities between which, Snow argued, the breakdown of communication between them was a major hindrance to solving the world’s problems.

In Wagner and Philosophy, we learn that the composer “underwent a transformation” upon reading the philosopher Schopenhauer, and found the libretti he wrote for his “Ring Cycle” was saying…

“… what Schopenhauer had made clear to him: that the world is an illusion, that the underlying reality of things consists of a metaphysical striving and yearning that can never be satisfied except from release from existence altogether.”

Among the many cogent observations within the essay The History of Science Grayling puts Aristotle firmly in his place. This was a welcome elucidation because I had recently come across Isaac Newton‘s disrespectful opinion of him, as recounted in my article of March 11th, 2009 . In that Aristotle’s name was a household word in my youth, this was a surprise to me. Aristotle was, after all, Alexander the Great’s tutor, among other more philosophical accomplishments. Here is what is said of Aristotle’s work in Grayling’s essay (excerpted and edited):

[T]he publication of Copernicus’s book (De Revolutionibus Orbium Coelestium—On the Revolutions of the Heavenly Spheres) and [Enrico] Fermi’s experiments [in the 1930s and 1940s] with the atom were immense not just in science’s history but in the history of the world. They are thus natural markers for the period of modern science’s first major growth. And yet progress in science has been even more stupendously rapid since 1942 [the date Fermi’s atomic pile “went critical”]. What a contrast to the almost-nescience of the Aristotelian intellectual hegemony prior to the Renaissance, when science had been stalled for 2,000 years along a wrong track first laid by that same Aristotle!

However accomplished Aristotle was in philosophy and other arcane pursuits, his physics was hopelessly grounded in faulty assumptions. He propounded that the universe was comprised of five elements:

So, for 2,000 years scientists were anchored to this misleading view.The essay goes on the recount Isaac Newton’s contributions, Alessandro Volta’s battery, Max Planck’s quantum theory, Albert Michelson’s and Edward Morley’s electromagnetism, Wilhelm von Röntgen’s X-ray, J.J. Thompson’s electron, and many others since the 1900’s whose names are familiar, especially those involved in the “Copenhagen Interpretation.” A following essay, Quantum Possibilities includes further reference to the Copenhagen Interpretation:

According to the great Richard Feynman, no one really understands quantum theory. It presents us with a truly bizarre picture of reality, a picture that, for a long time, we have only succeeded in making intelligible by supposing that the existence and character of reality depends on our own minds. This view is known as the Copenhagen Interpretation (named after the work of…Niels Bohr and his colleagues) and it mightily offended [Albert] Einstein, whose robust realism could not accept that the universe is somehow dependent on our observations of it…

Now, for one last blast at Aristotle, I quote from the essay Galileo and the Vatican, Newton and Alchemy:

Galileo not only made discoveries of the first importance in astronomy and physics—especially in the laws of motion, thus breaking the stranglehold of Aristotelian ideas…

The last seven essays in the book are fascinating looks and speculations that include on what it is to be human and to be conscious, whether there is life on other planets and what the future of humanity may be.

Three centuries ago René Descartes declared that the problem [of consciousness] was best solved by being ignored, and there are some philosophers today who agree with him. They argue that the supreme difficulty of the problem is a result of the fact that the human mind just isn’t built to understand its own basis—rather like the impossibility of an eyeball seeing itself…

Alan Watts’s answer to this conundrum resides in a non-scientific realm:

“God is the Self of the world, but you can’t see God for the same reason that, without a mirror, you can’t see your own eyes, and you certainly can’t bite your own teeth or look inside your head. Your self is that cleverly hidden because it is God hiding. “[Source]

In Science and Anti-Science, Grayling touches upon a concern of mine, expressed in my journal entry of March 4 of this year, Scientism, Secular Humanism, Hubris:

… [C]ritics charge science with ‘imperialism’ and ‘reductive undermining’ of meaning, value, beauty and spirituality. But in doing so they reveal an ignorance. It is true that some admirers of science, and even some scientists, believe that science will one day provide the answer to everything. Such a view is called ‘scientism‘ and it is a hopeless caricature of the true nature of science, which is much more sceptical (sic) and tentative in its objectives than either its extreme admirers or its critics realise.

I have the temerity, or cheek, to argue a bit with Professor Grayling here. Note that I gave emphasis to the word ‘believe’ in the immediately previous quotation. I chafe at seeing that word in any argument that purports to be based in the scientific realm. ‘Suspect’, ‘hypothesize’, ‘guess’, ‘assume’, ‘accept’ are words a true scientist uses, in my view. But Grayling is referring to those who are misusing ‘science.’ Where I disagree with him is that almost all scientists I have met do ‘believe’ that, through the application of science, we will someday know “everything.” I believe that this conceit is very much like what Alan watts refers to (quoted above) as “the impossibility of an eyeball seeing itself.”

In the final essay, The Future of Humanity Grayling concludes on a wistful note, in criticizing the book by Martin Rees, entitled Our Final Century: Will the Human Race Survive the Twenty-first Century?:

It is more likely that some partial catastrophe will cripple us enough to delay really big catastrophes by several centuries, by throwing us back into a medieval phase (of the kind some religions yearn for)… [Rees] doesn’t include the possibility of humanity’s maturation, in growth of moral sensibility of the kind that would bring humankind together in a fraternity intent on saving itself and improving its mutual lot. For this to happen, reason and kindness would have to flourish greatly at the expense of superstition, tribalism, enmities, greed and fear—a hopeless-seeming prospect, and one therefore that Rees does not consider. And yet it remains the sole true hope for the future, which is why some of us—like the pianist still playing as the ship sinks—will not give up the theme. And we know one thing: that even if in the end the argument for reason and kindness fails, it will in the meantime have made a little bit of difference in the direction of the good.