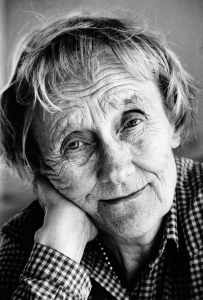 Other than the benefits of parental love, I cannot think of anything more valuable to a child than to fall in love with a book, or a character in the book, or the book’s author. Love of the author will take the child to more books by the author; love of a character will take the child to more books in a series, where there is one. Astrid Lindgren and her characters and books earned such love and she has, therefore, affected the lives of millions of people who are now grown up and, still, many who are growing up.

Astrid Anna Emilia Lindgren (1907 –2002) was a Swedish author and screenwriter who is the world’s 25th most translated author and has sold roughly 145 million copies worldwide. She is best known for the three book series titled: Pippi Longstocking, Karlsson-on-the-Roof and The Six Bullerby Children. Others of her popular books are:

What brings me to write about Astrid Lindgren is that I recently came across a modestly wonderful sculpture of her, by Majalisa Alexandersson, in a small Stockholm park, Tegnérlunden, the same park where I found the magnificent sculpture of August Strindberg about whom I wrote in my article of 16 December 2009.

Astrid is depicted as a storyteller surrounded by several of her figures, including Peter and Petra, Göran and Mr. Liljonkvast, Ylva-Li and others. The sculpture stands under a cherry tree – a setting that accentuates the fairy tale mood, especially when the tree is in bloom. [Source]

Lindgren’s drive to protect the powerless from the powerful also extended to animals, and she became a high-profile advocate of the prevention of cruelty to animals. Lindgren’s campaign, started as a reaction against industrial-scale farming, stirred up public opinion and led to the government announcing the so-called Lex Lindgren animal welfare law as an 80th birthday present for the author.

Lindgren earned many honors and awards in her long life, including grants to artists in her name:

In 1967, Rabén & Sjögren established an annual literary prize, the Astrid Lindgren Prize, in connection with her 60th birthday. The prize, 40,000 Swedish Crowns, is awarded to a Swedish language children’s author, every year on her birthday in November. Following Lindgren’s death, the government of Sweden instituted the Astrid Lindgren Memorial Award in her memory. The award is the world’s largest monetary award for children’s and youth literature, in the amount of five million Swedish Crowns. [Source]

I did not read Astrid Lindgren as a child; my focus was on the fourteen books by L. Frank Baum about the adventures of Dorothy Gale and other memorable characters who visited and lived in the Land of Oz and nearby fairylands.

Now when I have the chance to read (in English) to some current or future grandchildren, I will resist the urge to read Oz stories to them so I can learn, by reading to them, about Pipi Longstocking and other beloved characters in the stories of Astrid Lindgren.

Here is a link to all the pictures I took of the statue.