“Europe” is Old and Fading Away

I put “Europe” between inverted commas because it is more than a physical and political region of the world—it is a concept, a culture, an historical memory.

It also represents a people. Genetic scientists recognize three major groups of humans: Africans, Asians and Europeans. Simply put, Europeans are people found mostly in Europe and, via emigration during the last several hundred years, in the two American continents.

The Europe that is fading away is not the geographically defined region, but the people who carry the designation “European”. For evidence of this assertion, let’s look at the median age of the five regions I use for this study: 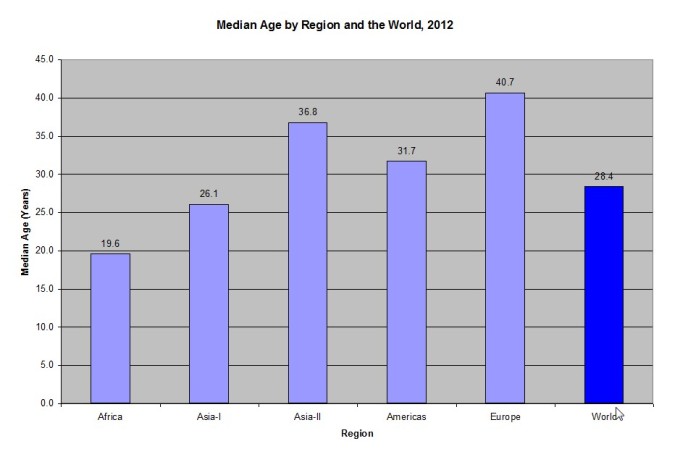 The median age is the age that divides a population into two numerically equal groups; that is, half the people are younger than this age and half are older.

The chart shows that the regions of Africa and “Asia-I” contain the youngest populations of the world, with the three other regions containing the oldest.

Before we look at other factors and trends to support my assertion in the headline, I should explain the terminology and country groupings (regions) used in this study:

(See the note at the end of this article for countries and populations included and excluded from this study).

Back to the discussion.

To begin to see the import in the wide variation in median age among these regions, we need to see the mass of the people within them: 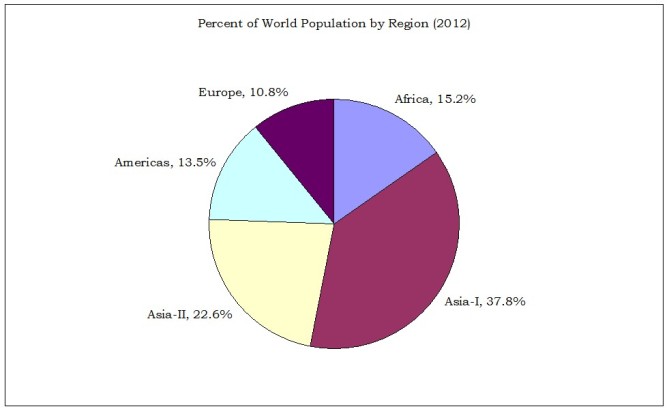 But what are the trends? What is the population growth rate in each of these regions? 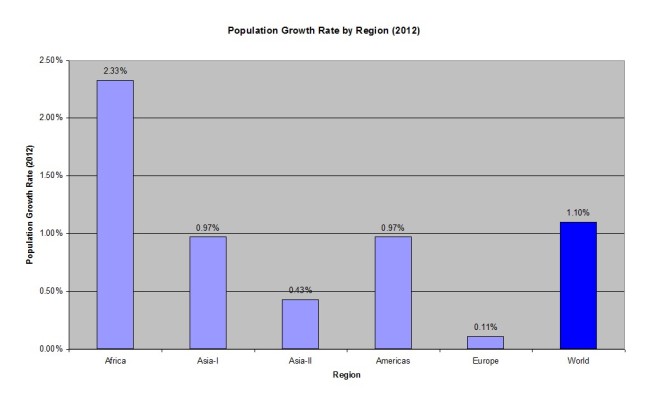 We see here that world population is currently growing at the rate of 1.1 percent per year. One region drives this number: Africa, at 2.33% per year. If all data from Africa were taken out of the calculation (i.e., if the continent theoretically did not exist), the world growth rate would be 0.88%. This calculation puts into even greater perspective that Asia-II and Europe are lagging far behind in population growth rate. 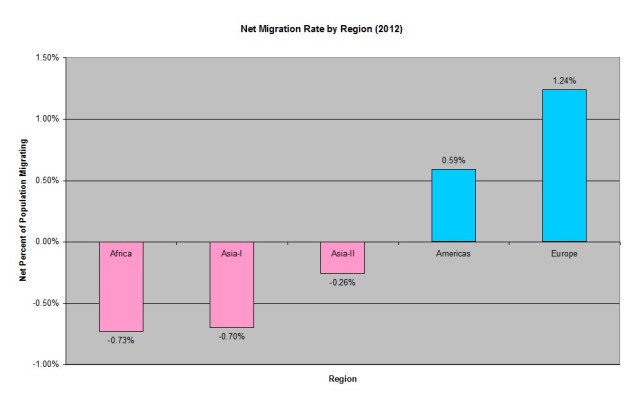 Without the migrants from other regions entering Europe, its population growth rate would have been -1.13%; that is, Europe’s population would have declined by 1.13%, or by around 8.5 million people.

As the nail in the coffin, let’s look at how Europeans are replacing themselves through the making of babies; that is, to study the Total Fertility Rate by region.

… TFR is a more direct measure of the level of fertility than the crude birth rate, since it refers to births per woman… A rate of two children per woman is considered the replacement rate for a population, resulting in relative stability in terms of total numbers. Rates above two children indicate populations growing in size and whose median age is declining… Rates below two children indicate populations decreasing in size and growing older. Global fertility rates are in general decline and this trend is most pronounced in industrialized countries, especially Western Europe, where populations are projected to decline dramatically over the next 50 years. (Emphasis added).] 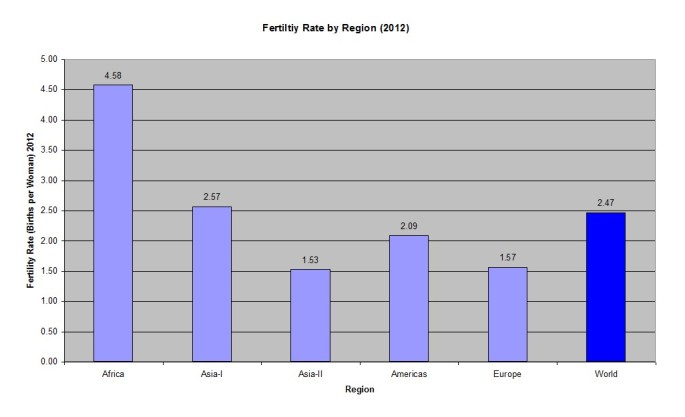 Both Europe and Asia-II do not have a sufficient number of newborn, to replace the old people who are dying, in order to maintain the current population (if there were a net migration rate of 0.0%).

Both Europe and Asia-II regions have populations growing well below the world average.

Both regions have a median age in excess of the world average and well above those of Africa and Asia-I. The people residing in these regions are getting older while the rest of the world remains very much younger.

The population of Europe is remaining stable only because immigrants from other countries make up for the deficit in European fertility.

If trends continue, Europe will be peopled mostly by non-Europeans.

If the trends continue as they are, Asia-II (this includes China!) will begin to fade away as well.

NOTE: There are 267 countries, dependent areas, and other “entities” in the world, as listed in The World Factbook of the CIA which is the source of all information here. I have placed 156 of these entities (almost all are countries) in the five regions described above.

Not included in these five regions are data from 107 countries and other “entities” all of which have populations under one million; nor are the data from Australia and New Zealand included. Also not included are data from two small countries: Kosovo (Europe) and South Sudan (Africa). The latter two countries are too new to have generated sufficient information. Altogether, the data not included here are from entities totaling 38.8 million people, or 0.55% of the world’s population of 7.022 billion people, in 2012.

Also, I have included Russia in Europe, as well as the Southern Caucasus countries of Armenia, Azerbaijan, and Georgia. Turkey is in Asia-I.

8 Responses to “Europe” is Old and Fading Away