René Descartes is famous for his assertion Cogito ergo sum (“I am thinking, therefore I exist”), or more popularly and pithily translated from the Latin, “I think, therefore I am”. 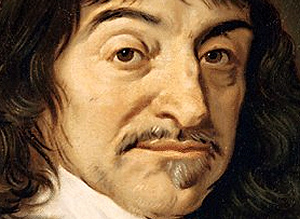 Descartes was enticed to Sweden at age fifty-three by the young Queen Christina, through their mutual friend, the French Ambassador to Sweden, Pierre Hector Chanut.  In 1646 Chanut corresponded with Descartes, asking him for a copy of his Meditations to give to the Queen. Christina started correspondence with Descartes about hate and love, and eventually invited him to Sweden. Descartes arrived on 4 October 1649. He resided with Chanut, but had to wait till 18 December until he could start giving private lessons to the queen. Accustomed to working in bed until noon, and being of delicate health since a young age, he probably suffered from Christina’s study regime which began early in the morning at 5 a.m. The premises of the nearby royal castle were icy, and on 1 February 1650 Descartes fell ill with pneumonia and died ten days later. (Source)

The Thirty Years’ War between Catholic and Lutheran states and factions in Europe had recently ended. As a Catholic in a Lutheran nation, Descartes was interred in a graveyard at St. Olof’s Chapel, a wooden structure used mainly for unbaptized infants, well outside the center of the city. In 1666, Descartes’ body was disinterred and returned to the building where he died and where the French Ambassador to Sweden lived, as had his predecessor Chanut: 68 Västerlånggatan (Western Long Street) in what is now “Old Town”. (More about the building further below). 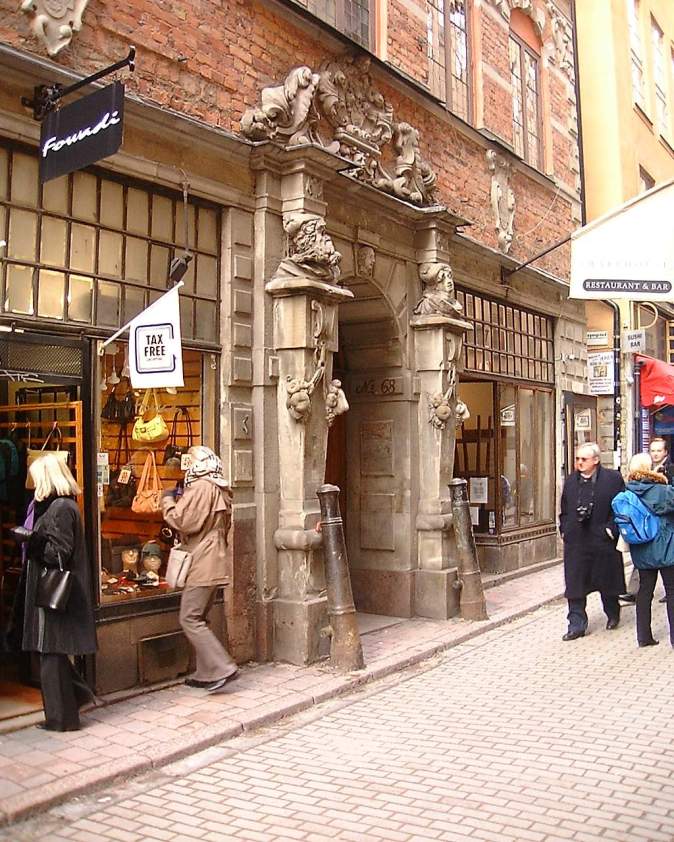 Hughues de Terlon, the French ambassador, was officially in charge of the secretive exhumation and transport of Descartes’ remains to France for proper ceremonial interment. The flesh had decomposed, so all that was left were the bones. This allowed the Ambassador to put the remains in a much smaller box, thus not having to transport a coffin which would bring unwelcome attention, en route, to this enterprise.

The bones were properly blessed by local Catholic officials before being placed in the box, but de Terlon requested the authorities that he might himself be allowed, “religiously”, to take possession of Descartes’ right index finger, the bone “which had served as an instrument in the immortal writings of the deceased”. They granted him this request.

The box was guarded by Swedish military men, at least one of whom removed the skull of Decartes before the box was transported to France. The Swedish family that became the proud owners of Descartes’ skull — how, it is not clear — had it lovingly inscribed with Latin verses celebrating its significance as a souvenir of the beginnings of rationality. Successive owners added their own signatures and inscriptions testifying to their own ‘faith’ in the relic.

(The story of the box of bones and the skull is wonderfully told in the book Descartes Bones: A Skeletal History of the Conflict Between Faith and Reason, by Russell Shorto, from which parts of the previous two paragraphs are taken.)

Ultimately, after centuries, all the bones except the index finger were reunited in the Abbey of Saint-Germain-des-Prés in Paris.

In 1774, a new church was erected on the site of St. Olof’s Chapel where Descartes’s remains had lain for sixteen years—Adolf Fredriks Kyrka.  Royal Prince Gustav (who, shortly after, was crowned King Gustav III) of Sweden wanted to honor the philosopher with a monument in the newly built church. The sculpture, rendered in lead, hangs on a pillar to the right of the altar in the church. The cherub unveiling the globe of Truth bears the likeness of Gustav III, the “Enlightenment King”. (Source). 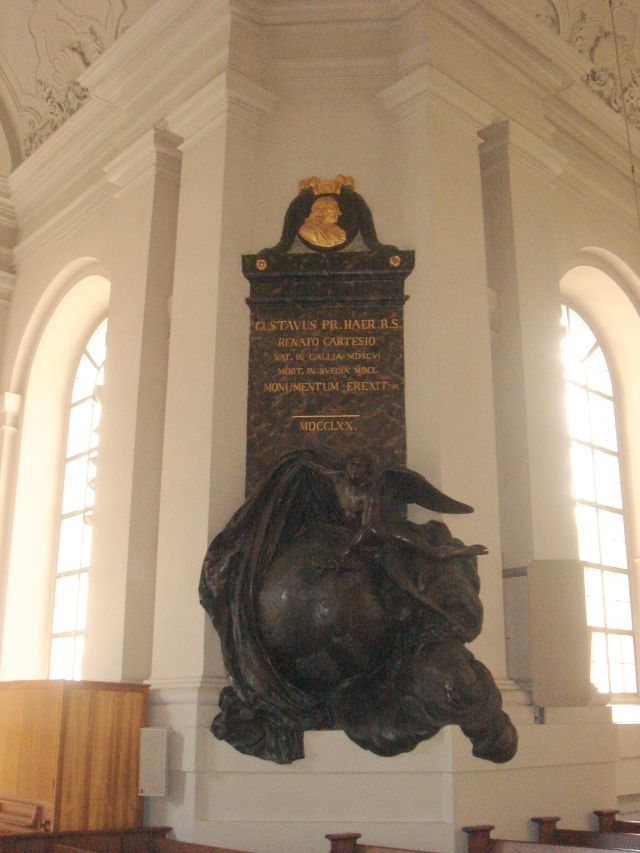 The full text on the monument is:

Gustav III (1746 –1792) was King of Sweden from 1771 until his death. He was the eldest son of King Adolph Frederick and Queen Louise Ulrika, who was a sister of Frederick the Great, King of Prussia. (Source)

The house in which Descartes briefly lived still stands in Gamla Stan (Old Town), Stockholm (pictured above). Here is a close up I took of some of the decoration at the entrance:

This is a red four-story building in Baroque style, called von der Lindeska house, named after the merchant Erik von der Linde, who had built it in 1630. In 1646 the house was sold to Queen Christina , who in 1648 donated the house to her half brother, Gustaf Gustafsson af Vasaborg . The building has a façade in the Dutch Renaissance style. The entry is adorned with the heads of two gods, Mercury and Neptune . On the wall are two cartouches with texts in German, in translation: Everything depends on God’s grace (An Gottes Segen ist alles gelegen); Put your hope in God alone (Auf Gott allein setze die Hoffnung Dein) (Source)

I wonder about the lessons to be learned from the sad ending to this illustrious man and his valuable work. He was only 53, but he had already given the world a way of seeing things which still reverberates between those who prefer faith to reason, and vice versa. A reading of his biography may give an answer to this. Here’s a place to start: Stanford Encyclopedia of Philosophy: Descartes.